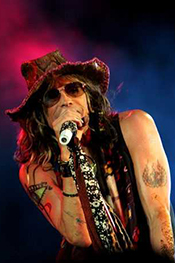 On the next Live in Concert, we’re going back to Aerosmith’s “Global Warming” world tour.

It was a massive tour! For 25 months, Aerosmith was out playing incredible concerts, night after night. We’ll listen to their headlining gig at the 2014 “Download Festival.” It was June 15th, 2014.

It was captured live at Donington Park in Castle Donington, England on June 15th, 2014.

Don’t miss this legendary performance by Aerosmith- they’re headlining the next Live in Concert!