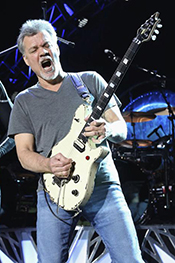 It's hard to believe it's been over a year. The passing of Eddie Van Halen on October 6th, 2020, left the world shocked and saddened.